What Is YouTube Cash Cow Channel And How It Works 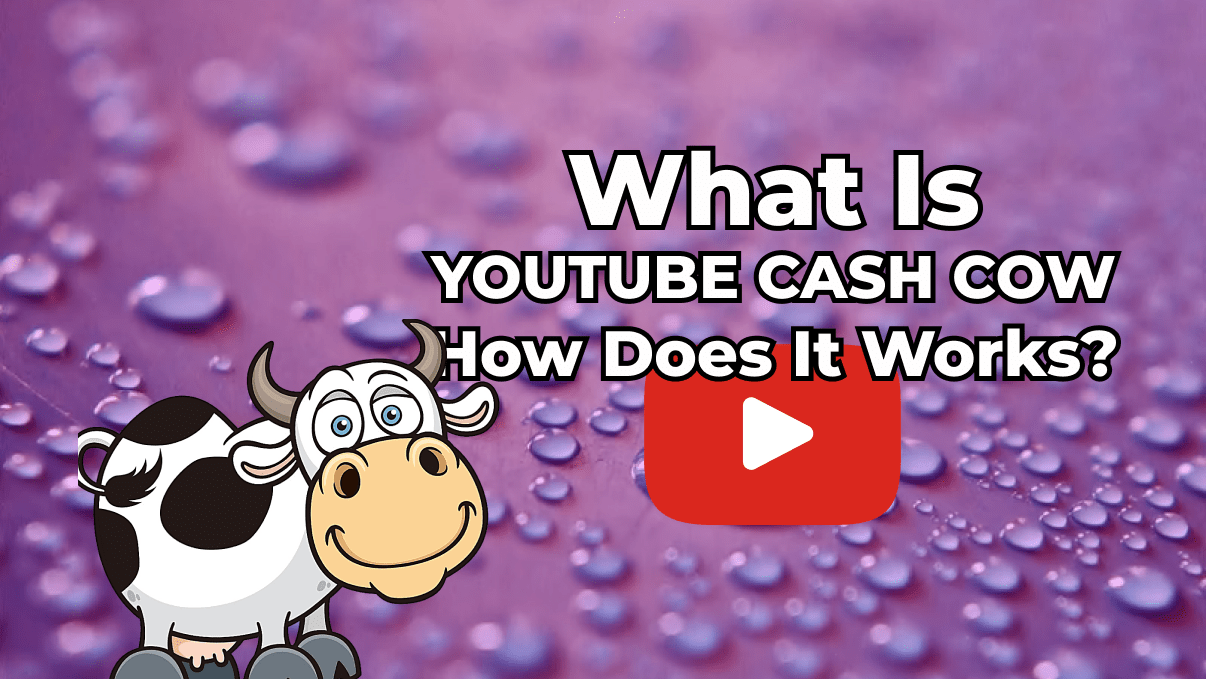 What Is YouTube Cash Cow Channel is And How It Works, then you have found the right post for yourself.

We will be discussing how you can earn money with a youtube cash cow channel.

meaning that you don’t have to do any of the work, When you make a youtube video there are five main processes that the

creator must go through, these five processes must be done before the video is complete.

These processes are as follows:

The initial narrative that the youtube video will take is one of the most important processes,

Whatever your video idea is we’ll determine exactly what way the video will go.

This process is how the video will go, what topic will the video cover? What will you talk about?

For how long would the video duration be, what points will you make and what will you reference.

The voice of your video is the human touch who’s going to be the voice for your content,

what accent or tone of voice do you want your viewers to hear.

This is very important as it’s the part where you capture attention to the actual chunk of the video,

and determine if your video goes viral.

This is also a very important part, this is what your viewers will see before they click on the video,

What’s in the video is also important, now YouTube Cash Cow Channel at the idea is to get all these processes

done by somebody else and then in most cases, it’s usually done by a freelancer hired through websites, like Upwork or Fiverr.

So the idea is to make every single video on your channel without actually ever doing any of the work yourself.

produce all the components of your video which costs up to three thousand dollars per month.

it leaves you with more time. with this time you can either enjoy your life and the money you have created or scaled.

the channel up and growing profits by increasing your video production rate.

because they are covering some of the workloads.
This means more videos uploaded and thus more profits, it sounds very easy in theory but very hard to put into practice.

something that is really easy because when people hear of a business model that is %100 automated.

It makes you think that the business model doesn’t take much time or much effort to run, however,

this couldn’t be further from the truth youtube automation is definitely a hard Business to make work.

Once you’ve got your youtube channel up and running, automating isn’t hard at all, it’s the initial stages that get everyone.

This is because building momentum on youtube is actually pretty hard but once it gets going, it’s actually relatively easy to grow a channel.

There are two main ways you can start youtube automation,

1. You must have an existing Youtube cash cow channel and use the profits from that to automate it

2. Use your existing savings to fund a new channel

3. Start a new Youtube cash cow channel and plan to automate it.

Let’s go over how you do either one

channel and scale the business with more youtube channels.

This is by far the easiest method to get into youtube automation that exists right now.

This is because there is less risk of you losing money because your channel is already generating a profit.

has regularly been bringing us around five thousand dollars in profit.

We can now use this figure to start hiring employees to take off some of our workloads since there are five processes in the youtube video creation process.

Who can start by picking the process for us that is most difficult and time-consuming for many people, this would be video editing

meaning that our first step would be going over to fiverr.com or upwork.com and searching for a freelancer that would be able to edit videos for us now.

Once we’ve hired a video editor we would need to incorporate those costs into our monthly budget.

For example, we would set a monthly budget at probably around one thousand dollars to produce a month’s worth of videos

which would leave us with a month’s worth of profit of four thousand dollars.

to do one process of the youtube video creation since we’ve already hired a video editor.

The most difficult part after this is most likely a scriptwriter, the reason I like to hire scriptwriters instead of voice over artists is

because script writing takes a lot of time and a lot of research in some niches.

Whereas recording a voiceover is a basic skill that can be done by yourself.

of the level of content, you’re going to be able to get from someone else that’s researched the content.

Well is going to improve the level of your videos a common mistake people make is that they don’t understand that people don’t care how you sound.

They care about what you have to say, So our move here is to hire a scriptwriter that understands our niche entirely now when hiring a scriptwriter.

You can go to two main different sites the two main sites that most people use are Upwork and Fiverr.

Hiring a scriptwriter from these websites will usually cost anywhere between fifty dollars to hundred dollars for one thousand words. Now,

this is a base cost you have to understand that this cost will vary depending on your niche.

If your niche is very complex, one like personal finance then it’s going to cost a lot more to get 2000 words compared to if it’s a niche based on entertainment.

Where the content costs are a lot cheaper so now that we’ve hired a video editor and scriptwriter.

our video ideas the voice over and the thumbnail.

Once all these processes are done and now the channel is fully automated and still makes a profit.

We can then focus on starting our second youtube channel or focus on scaling this one.

Unlike most people that focus on starting multiple channels.

so then you have a channel and then you automate all the processes of it.

This can usually only be achieved when you have a channel that doesn’t show face or doesn’t really have a personality attached to it.

A channel where viewers are simply just there for the content and this means that the content is the main focus of the video.

The second way to start youtube automation is to simply use your profits to invest in hiring people from the
Beginning.

However even as an experienced youtube cash cow automation creator, I regularly don’t do this the reason you don’t want to

starting a youtube automation channel isn’t something that always brings a return on investment.

Meaning that if you decide to spend six thousand dollars on four months’ worth of videos.

You have no idea whether or not those videos are going to bring a return on investment, also you need

to understand that when you’re building a youtube automation channel.

you don’t get accepted straight away, your channel could be burning your cash very quickly, in order to keep the channel going

and unless you have lots of money stashed away in the bank.

it can be done it should only really be done.

reduces the risk of losing money on your initial investment.

So what’s the best way to start a youtube automation channel?

is to either pay someone to do it for you which is going to incur a high cost.

Which usually starts at around twenty thousand dollars and you may not see that money back for a long time.

that has features which means it can be automated in the future.

So the best bet would be to start this channel cheaply by working on it yourself and doing the work initially by yourself,

of the channel such as the video editing process, the voice over, the scriptwriting process eventually.

Your channel reaches a point where every single part of the youtube channel will be automated and you’re just telling people what to do and sending files to and from each freelancer whilst this channel is automated.

You will be collecting a nice monthly profit, Which you can do whatever you like with so that basically covers the youtube automation process.
1: Start a faceless channel
2: Grow the channel
3: Monetize the channel
4: Outsource some of the processes
5: Automate all processes
Step 6: Rinse and repeat

EveryDollar Vs Mint: Which Budgeting App Is Best

Best 20 Digital Marketing Side Hustle In 2021